Why Did This Man Refuse To Salute Hitler?

For the original article on National Geographic, please click here

This picture was taken during the most dangerous period of Nazi occupied Germany. 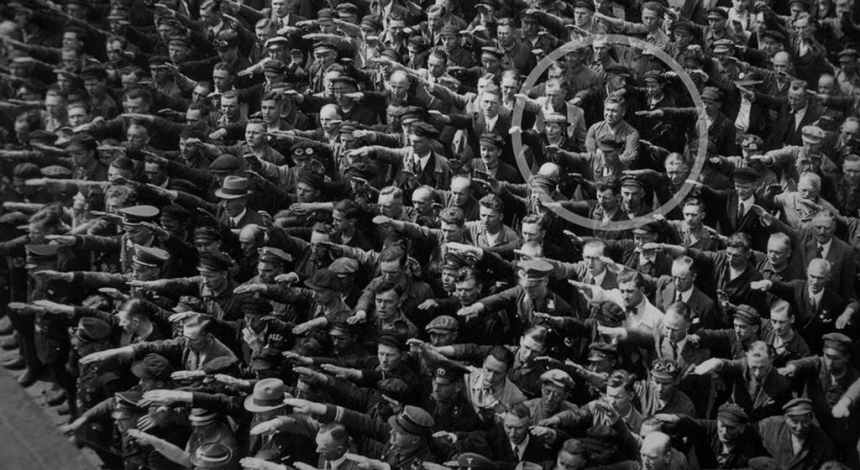 Nazi ridden Germany was a terrifying place. Any act of defiance was punished cruelly. A single act of bravery stood out against a backdrop of blind compliance. The infamous Nazi Salute was adopted by the party in the 1930s and was a ‘compulsory’ greeting for all Germans as a sign of demonstration of respect and loyalty to the Fuhrer. During the 1936 rally, in the presence of Hitler himself, one man, August Landmesser refused to salute.

August Landmesser joined the Nazi party in 1931, slowly working his way up. But just two years after joining, Landmesser met Irma Eckler, a Jewish woman and fell madly in love, swiftly proposing to her in 1935. Nothing remains secret in Nazi Germany, and word soon spread of Landmesser’s engagement to Eckler, his love for a Jewish woman led to his expulsion from the Nazi party. Eckler and Landmesser filed a marriage application in Hamburg, but it was denied under Nuremberg law- a set of rules enforcing Jewish exclusion and further limitation of Jewish rights. Landmesser and Eckler welcomed a little girl, Ingrid in October 1935. Less than a year later Landmesser crossed his arms during the famous 1936 rally, in what would become one of the most famous photos taken during the second World War.

As Nazi Germany became more and more powerful, Landmesser saw the need to escape with his family. He attempted to defect to Denmark with his wife and child. However, were unfortunately stopped and detained at the border. Landmesser and his family were charged with “dishonouring the race” and “racial infamy.” Due to lack of evidence, the case was dropped a year later, and Landmesser was ordered to end his relationship with his beloved wife. Unwilling to leave her, Landmesser once again defied the Nazi regime. This led to his eventual imprisonment in 1938 and a three-year sentence in one a Nazi concentration camp. August Landmesser would never see his wife or child again.

Eckler, who was several months pregnant at the time was arrested and taken to a concentration camp by the secret police. She gave birth to Irene, the couple’s second child. Soon after, Eckler was transferred to one of the Nazi’s death camps where she was murdered with 14,000 others. Landmesser worked a few jobs after his prison sentence, before being forced to join the army in 1944. He was declared missing in action months later.